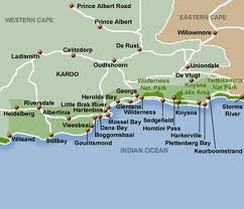 In 2005 Dave and Julie Rudolph began to travel to the southern edge of the continent to an area called the Garden Route.  With the help of other missionaries they began a Bible study in the town of Sedgefield.  The group they met with came from four different towns along the Garden Route.  These towns were George, Wilderness, Sedgefield, and Knysna.  At the end of 2008 missionaries began moving to this area with the desire to see churches planted.  In February 2009 the Pacaltsdorp Baptiste Bybel Kerk in Pacaltsdorp was started by Miles and Shirley Schilder, who are South African church planters.  In March of 2009 the group from George began the Agape Baptist Church with missionaries Bryant and Sharan Crane and Julie McFadden.  Upon their arrival to the field Rodney and Tina Poplin joined the team in George.   In May of 2010 the Lagoonside Baptist Church began in the town of Knysna with Dave and Julie Rudolph and Amy Blackburn.  At this time the Lakeside Baptist Church in Sedgefield was turned over to Lee and Janelle Peterson.

In 2013 at Lagoonside in Knysna, Dave and Julie were joined by missionaries Phil & Kristen Golson who specialise in Music ministry and Radio, as well as local pastor Wayne & Kirstie Schmidt. Amy Blackburn married and relocated to Cape Town to serve in ministry there in 2014.

In 2017, the Non-Profit Organisation was established named Knysna Hope. Caleb Mello was recruited as COO of KH and came with his wife Terra and their two lovely children. The Mello's were later joined by George & Amy Coon then later by Herb and Janet Hunter in 2018. Herb and Janet Hunter soon initiated a church planting initiative in Belvidere. Also, George Coon commenced setting up the Biblical Leadership Institute to train up men and women in ministry locally.

In 2018, missionary Hannah Bennet also arrived and served as a great replacement for Amy, but also has a burden to work with young women and crisis pregnancies etc. In 2019, Brett and Britni Stowe arrived in Knysna seeking to minister to millenialists in Knysna and is situated at lagoonside.

The Garden Route Team is comprised of missionaries, pastors and Christian workers of like faith sharing talents, abilities, and collective experience as they work in collaboration for church planting through evangelism, discipleship, and leadership training along the Garden Route.
If you would like information about the ministry along the Garden Route,
please email us at gardenrouteteam@gmail.com